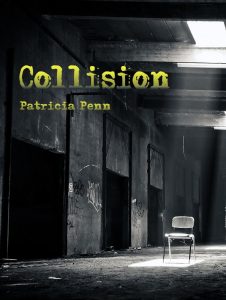 Lolo De Valle returns home to find two kidnapped FBI profilers in her basement: The men who control the Chicago drug cartel alongside her had the grand idea to torture them for information about the serial killer who keeps attacking their dealers. The problem with that: Lolo is an undercover agent for the FBI herself, sent in by the Narcotics unit for the biggest drug bust of her career, and very much not inclined to either break the law or those two agents. How to decide whose operation should be sacrificed over the other, though? And, for that matter – how to get all of them out of this alive?

There is probably never a good time to mention that I’m quite fascinated by serial killers. Psycho thrillers are my favorite genre; I could just devour them by the dozen. However, I’m no good at writing murder mysteries, and this isn’t meant to be that. Collision came from an itch I had to delve into all the stories that could be told about serial killers that don’t get written, because they don’t follow the established tropes. There’s probably going to be more of those in the future. I have a list somewhere.

Get notified of new posts: