What you’ve never wanted to know, but now you’ll learn about it anyway. 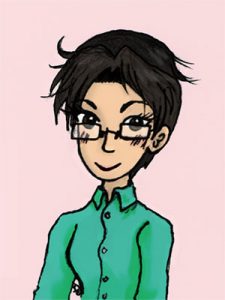 Patricia is into obscure trivia. Such as: Horses cannot do and think at the same time. So after every exercise, they should be given a moment to meditate upon the lesson. Also: In dangerous situations, we’ll freeze whenever we don’t see how either running or fighting could save us. And: Research on serial killers tends to neglect the gender point of view.

Thus Patricia is not the greatest conversationalist in the world. This explains why she prefers writing, and has been typing over five hundred letters a minute ever since she was a teen.

And now, hush, go read the fic — that is considerably more interesting than soul striptease, Patricia style. Or if you’re already through with that, sign up for the newsletter so to not miss any updates. I’d be flattered if you did that. Really flattered.